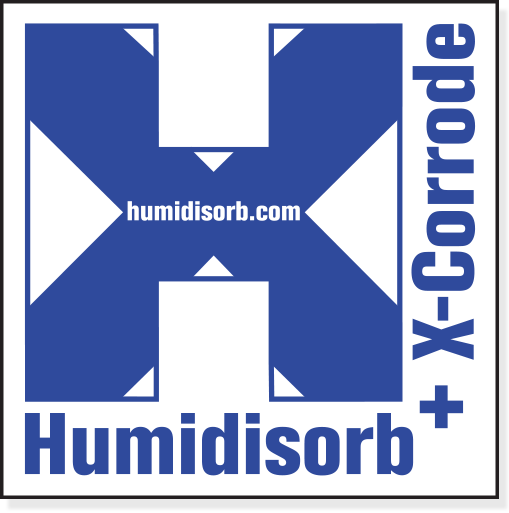 Providing protection for enclosures and equipment against damage from relative humidity and corrosion!

Moisture and Corrosion Control Packets provide the best protection against damage from relative humidity and corrosion for any enclosure or piece of equipment that is operating, in transit, or in storage. The contents of each packet will not affect or damage non-metal material and can withstand maximum temperatures of 176°F (80°C) and exposure to high humidity without impacting their effectiveness. All packets come with self-adhesive mounting tape, which allows for easy installation into any enclosure, even if the enclosure is frequently opened. They are constructed of a heat-sealed, semi-permeable membrane material filled with Humidisorb, X-Corrode, or Humidisorb Plus X-Corrode, depending on your application needs. Humidisorb Plus X-Corrode Packets provide moisture and corrosion control in electrical and electronic enclosures.

Humidisorb is a self-regenerating desiccant that can absorb and release enormous quantities of moisture from surrounding air without becoming saturated. When first placed in service, a packet of granules will begin rapid absorption of moisture. The packet will absorb at least five to ten times more moisture than the conventional desiccant before coming to equilibrium with the relative humidity (RH) of surrounding air. This will usually take several weeks to occur, even in very humid environments. During periods when the enclosure RH is lower than its long-term average the packet releases moisture in vapor form. The moisture desorption process cannot wet the air above its average RH level. When enclosure RH tends to rise above its average level, the packet absorbs moisture. By absorbing moisture when the RH rises, and releasing some of the vapor phase moisture (regenerating) when the RH drops, the packet maintains a constant RH within the enclosure that is equal to the long-term average humidity.

X-Corrode provides protection against airborne contaminants that cause corrosion, such as Hydrogen Sulfide (H2
S), Chlorine (Cl2), and salts. The X-Corrode formula provides a durable passivation on the surface of circuit component metals; other metals, such as aluminum and steel that may be present in an enclosure, are also passivated, but to a smaller degree. Tests have shown that once a metal surface was initially passivated by X-Corrode, the packet could be removed with corrosion protection remaining for weeks after. This means that frequently opened enclosures are also well protected by the X-Corrode packet.

The mixture of the desiccant and corrosion inhibitor has three distinct advantages over use of the individual Humidisorb and X-Corrode packets. First, it is easier to stock and install a single packet instead of two. Second, it costs less than the combined cost of a Humidisorb packet and X-Corrode packet. And third, its life span is substantially longer than that of the X-Corrode packet alone. The Humidisorb granule portion of the mixture does not need to be replaced. The life span of the X-Corrode granules is greatly extended (from typically two years to approximately 10 years) due to its encapsulation by the Humidisorb granules after the packet has been exposed to moisture.

Not sure how much you need?

How many packets do you need?

Please measure the length, width, and height of your container, then enter their values in the fields below. All fields are required.